On being born twice and on the memory of it 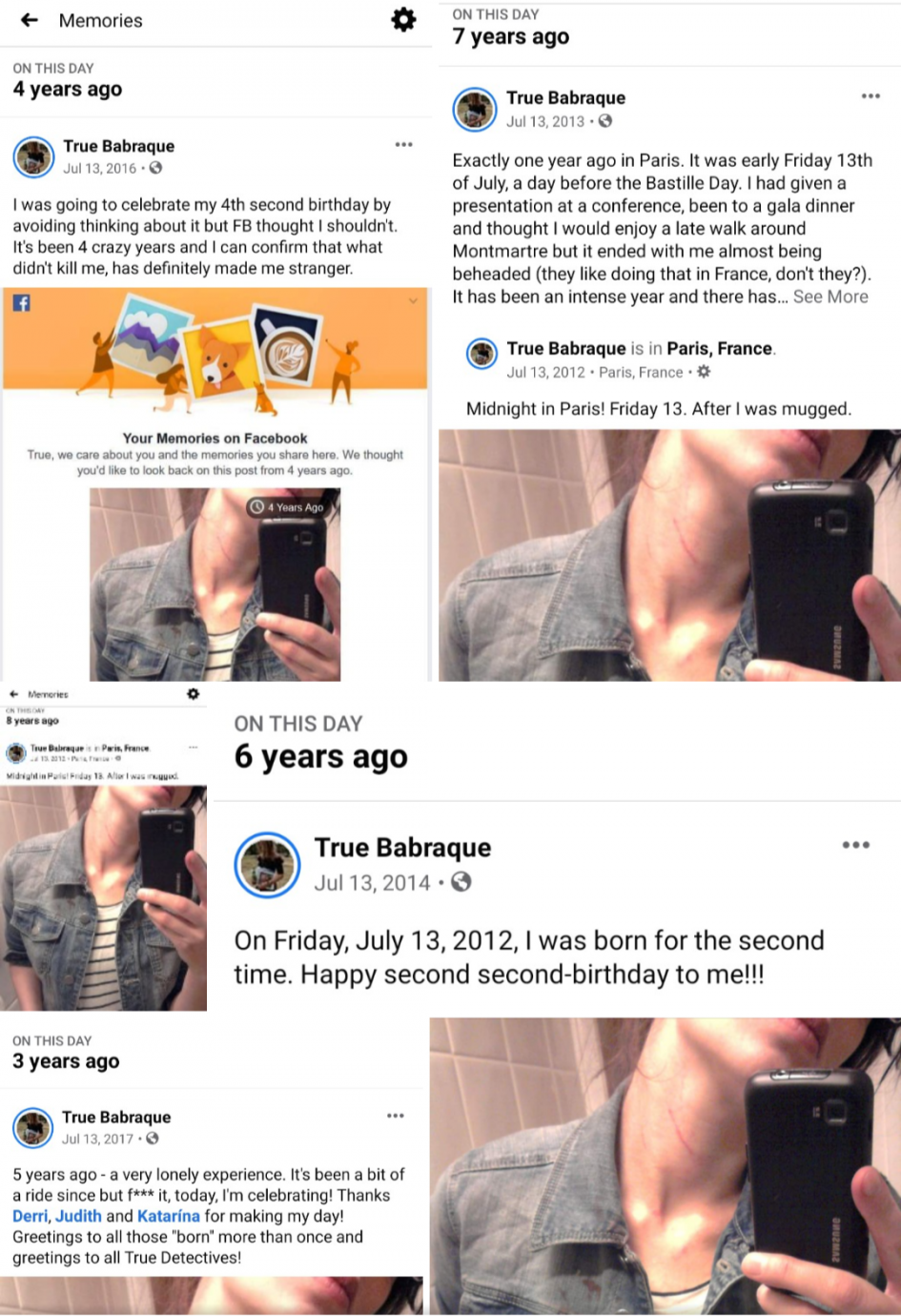 Trauma is a time traveller, an ouroboros that reaches back and devours everything that came before. Only fragments remain.

One’s true birthday should not be celebrated on the day when they were born, but on the day they were reborn. I was reborn on Friday 13th of July 2012. Every year, I try to write something about it but I never know what to write because I’m unable to put the pieces together to create a single narrative.

One of my first memories is sitting in a police car thinking how strange it was that such a real situation felt so unreal. I felt like I was in a movie and wondered how people experienced traumatic events before cinema existed? As dreams, perhaps? Or simply – as reality? Has cinema interfered with how we perceive reality and our true selves? Is that why I fantasise about a cinematic version of the story so I could actually perceive my own story as real?

These questions were the labour pains that accompanied True’s delivery!

I directed the police to the crime scene and then realized, I made a mistake. That failure to remember the crime scene and give correct directions to the police planted a seed of self-doubt and shame that have been part of everything I’ve ever remembered or said about the event and colonised every narrative I’ve tried to create. Even the one I’m creating now and even the one I reported to the detectives – the one that was supposed to be plain and factual, simply answering the question “what do you remember?”

I said the attacker was attractive because he had a symmetrical face. I described his clothing too. The police repeated those facts over the radio to other police and within a few minutes – or maybe hours – they found someone and asked if I was ready to see him. He matched the description but not my feeling of perverse attraction. I said it wasn’t him. As we drove off, I asked the police to stop the car so I could throw up but I couldn’t. I felt like I must have been the worst victim ever, wasting the time of 2 police crews. Or was it 3? And I couldn’t even throw up when I said I needed to.

They took me to the police station where I was asked the same questions as before. Was he black? “No, he was white,” I said, “with almond-shaped eyes.” I insisted on that detail to perhaps justify that sense of attraction to myself. But my poetic descriptions were getting lost in translation and the next thing I knew I was looking at 3000 images of men, predominantly not white. I wanted to protest but I was afraid that if I did I’d make myself even more unreliable. The system had already hijacked the situation, and filled all the gaps in my memory and all the lost translations between English and French, with injustice and biases.

I felt so ashamed and hesitated to point at anyone while feeling like it would probably be nice of me to be able to point at someone and help the police with ongoing investigations. As I was there taking up the French police force’s time, one day before the anniversary of the Storming of the Bastille, repeating the same facts as they were being typed into a report, I was remembering all sorts of things. For example, a TV documentary I had seen a long time before, about famous cases of false accusations. Or was it about human memory? Maybe both. In particular, I thought of a case of a rape victim who’s false memory led her to wrongly accuse an innocent man. The scientists in the documentary explained that in extreme situations, our brains respond first with the fight or flight instinct, only afterwards, do they bother to remember. In the case of that woman, the memory got activated when she saw another man and her brain made a false connection between that man and her trauma. Anyway, I was there remembering that documentary and wondered if one of the waiters who ran after my attacker might have been attractive, with a symmetrical face and almond-shaped eyes. And was I having a crush on every detective from that night? What was wrong with me? What was I thinking going to Sacre-Coeur so late? And what kind of an Anthropologist was I if I failed to find a way to provide a lecture on systemic racism to the police? But who was I to think of explaining that to the mixed-raced detective?

When I came back from the police station and entered my hotel room, it wasn’t the room I remembered. Nothing was the same. I wasn’t the same. I had to stare at myself in the mirror for a bit. Then considered cutting my fringe – it seemed too long.

“I might not be thinking clearly,” I thought and decided it made more sense to go to bed. Not before taking a selfie, though! As an evidence – in case everything would be different again in the morning, or in a week, or in 8 years, I need to remember!

That realisation that I wasn’t thinking clearly, was a sign of clear thinking. It was the first of many moments of serious confusion about the distinction between clarity and madness.

What is the distinction between clear thought and madness? There is none. And in fact, I’ve found joy and life in that confusion and therefore, on the anniversary of my second birth, I celebrate life in all its shapes and forms and expressions and materialisations. And confusions! I root for everything to make it to the next day – the living creatures as well as objects with life’s stories in them. I root especially for life that goes unnoticed, unappreciated, which seems ugly, disgusting, broken, cracked, smelly, annoying, disposable. My favourite are all those forms of life that stubbornly grow and thrive in harsh environments, against all the odds, stubbornly finding the cracks in the in the cracks of sense and want to live and thrive in harsh environments against all the odds.

Photo on the postcard by Wolfgang Tillmans